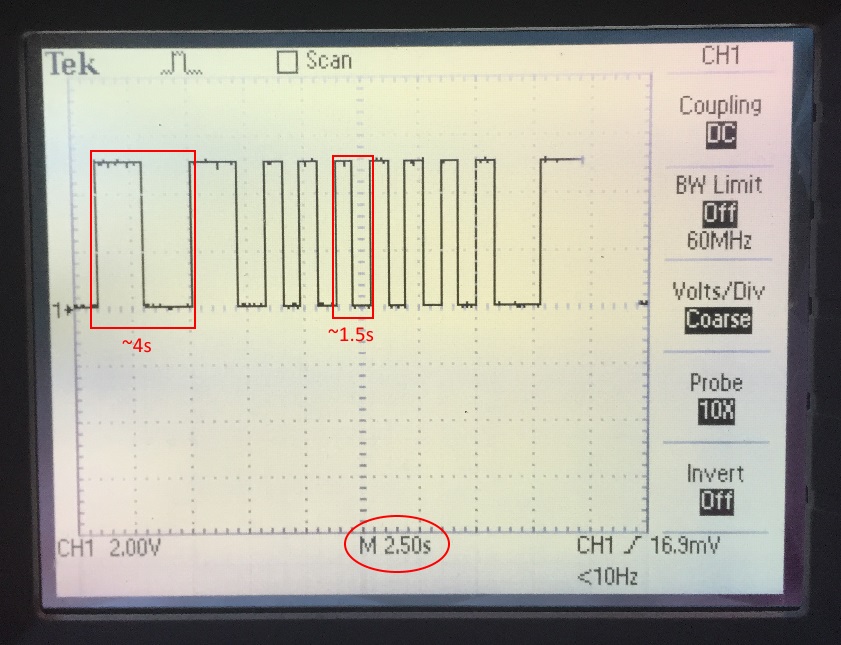 I’ve always planned to monitor my electricity usage. I had previously (about a year ago!) ordered some power transformers from seeedstudio and a six channel ADC for simultaneous three phase current and voltage measurement but never got around to starting the project.

We’ve since had a “smart meter” installed which has a handy LED on it that flashes once every watt hour of energy is consumed. It also has and IrDA port on it but I believe the communications protocol is password protected and will report a tamper state if the password is tried too may times. Because of this, I decided it was best to optically interface with the meter, and best of all, I’ll be measuring the exact amount of power we get billed for. Unfortunately I won’t be able to predict the bill amount (in dollars) as the three phases that come into the house are billed at different rates while this LED pulses the combined usage. 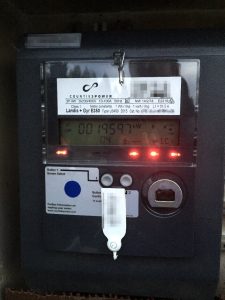 I brought a TSL257 “Visible light Photodetector” and started to play. The first thing to notice with the TSL257 is that it is very sensitive – When it’s sitting on a desk in normal ambient light levels, the output is saturated to full input voltage. If you carefully cup your hand around the sensor you can start to see the output voltage drop.

I decided to “pot” the sensor inside a plastic bottle cap. I soldered a lead onto the legs of the sensor, drilled a hole in the side of the lid and added generous amounts of hot glue so that the lens of the sensor was mounted centrally in the cap. I also put some black insulation tape behind the sensor to limit ambient light coming from behind. I then used a scalpel to cut off the excess glue so that the bottle cap had a flat face. 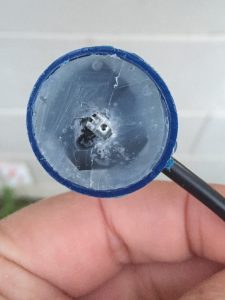 After a little testing (more on this below) to make sure it worked, I added some double sided foam tape so it could be attached to the power meter. I intended to put a hole in the middle with a hole punch, but ended up just roughing it with a scalpel.

After carefully lining up the sensor with the LED on the meter, I stuck it in place. I decided it was also a good idea to label the sensor so that the Meter reader (Yes, our “Smart” meter is read manually by a person every two months) doesn’t think it’s suspicious. 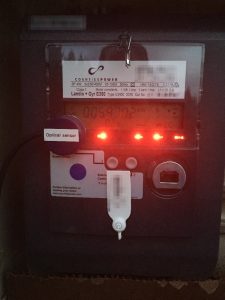 To confirm that the sensor was working, I connected it up to a 5V supply and into my oscilloscope and got a really nice clear signal. 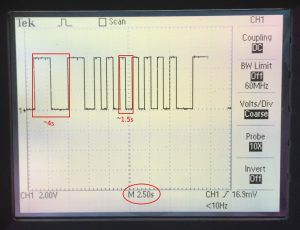 The next step is to get a 3.3 Volt supply into the power meter to power a Wino-Board.

I was expecting to need to use a voltage divider on the output of the TSL257 before it went into a digital input of the Wino-Board, but the signal is so clean, it’s probably not required.