I bought a Logitech C920 webcam last week. It’s a very nice unit which outputs Full HD (1920×1080) video. The picture is really clear but it draws more power than the Raspberry pi can supply.

For me this power problem affects my network connection. It seems that the Network adapter is very picky when it comes to it’s supply voltage.

The Webcam seems to draw about 240mA at 5 volts when it focuses, while the Raspberry Pi is limited to 140mA per USB port and 1.1A total current draw.

The Raspberry Pi limits these currents by way of Polyfuses which are a fuse made of a special polymer. They “blow” like a fuse if too much current goes through them, but then over time “heal” and conduct again. Unfortunately due to their inherit design, before they “blow” their resistance increases as the current increases. This can cause a drop in voltage, commonly referred to as voltage droop.

Without going into too much more detail, this basically means that as a USB device approaches a 140mA current draw, the voltage going to the device will drop and in much that same way, if the total current approaches 1.1 Amps, the system voltage will drop.

I decided the best way to fix this problem is to bypass the Polyfuses on the USB port with wire links. This would mean that the 140mA limit was bypassed, but the total 1.1 Amp limit would still apply. Note that this more than likely voids the warranty on your Raspberry Pi.

You first need to find the PolyFuses on your Raspberry Pi. They are easy to find, they’re the two green “blocks” on the board between the USB port header and the activity LEDs.

All you need to do is take two short (~20mm) pieces of wire and solder them to each side of the Polyfuses. Be careful not to unsolder the Activity LEDs.

And that’s it. Your USB ports are no longer limited to 140mA. The total board however is still limited to 1.1 Amps.

Remember that there are two easy to access test points on the Raspberry Pi to measure the system voltage. These points are labelled TP1 and TP2. 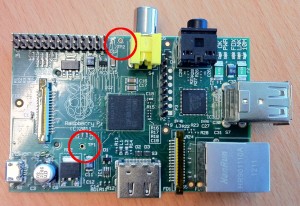