The Lunar Reconnaissance Orbiter (LRO) has been orbiting the moon for months calibrating it’s instruments and lowering it’s orbit. It is now in a 50km polar orbit about the moon.

As with any optics, being closer normally results in a higher resolution, and with no atmosphere on the moon to distort images, the LROC (Lunar Reconnaissance Orbiter Camera) is now taking the high resolution mapping photos it was designed to take.

I wrote about the LRO back in July 2009 when it first took photos of the Apollo landing Sites. That post is available here.

Here is the first publicly released full resolution image of an Apollo landing site. It’s of the Apollo 17 landing site – the last time men set foot on the moon. (Click to enlarge) 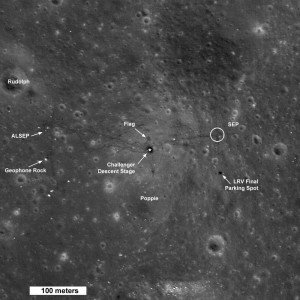 The Apollo 17 lunar module was called Challenger and the descent stage is clearly visible. The resolution of this image is good enough that the shadow of the American Flag left behind is also resolved.