Forty years ago, Michael Collins was in orbit around the moon and two brave men, Neil Armstrong and Edwin (Buzz) Aldrin (Jr) were sitting inside Eagle at Tranquility Base on the moon getting ready to make history and be the first men to ever walk upon a foreign body.

At 03:56:15am tomorrow UK (summer) time, back in 1969, Neil Armstrong placed his left foot upon the lunar regolith and said the words “That’s one small step for (a) man, one giant leap for mankind”, while the world’s population united as history was made. Mankind will forever cherish the most important moment in modern history, as one of our own, a homo sapien simultaneously explored a new world and gained the capability to escape our certain future of extinction on Earth (home sweet home).

Voyaging to another “heavenly” body (I’m not a religious man) wasn’t without it’s risks, and President Nixon didn’t want to be caught out in the event of a disaster.  A speech was prepared for the possibility of Buzz and Neil being the first men to walk on the moon, and die on it.

Here is the speech.  Revealed in 1999, it was prepared by Nixon’s speechwriter at the time, William Safire… 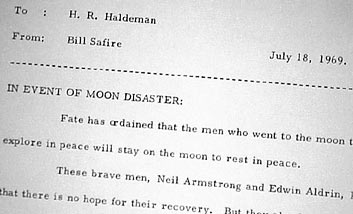 These two men are laying down their lives in mankind’s most noble goal: the search for truth and understanding.

In their exploration, they stirred the people of the world to feel as one; in their sacrifice, they bind more tightly the brotherhood of man.

In ancient days, men looked at stars and saw their heroes in the constellations. In modern times, we do much the same, but our heroes are epic men of flesh and blood.

Others will follow, and surely find their way home. Man’s search will not be denied. But these men were the first, and they will remain the foremost in our hearts.

For every human being who looks up at the moon in the nights to come will know that there is some corner of another world that is forever mankind.

Just reading the speech above chokes me up as I appreciate the risk that these men faced. I’m disheartened that being an “80’s child”, I didn’t witness this historical moment with my own eyes, having only witnessed it on VHS, DVD, Satellite Television and YouTube. I can only hope that one day I will be down here taking a breath of Earth’s lifesaving air while I can look up knowing that astronauts above me have left the safety of low earth orbit on a new voyage of discovery.

It’s time for mankind to make another leap. It’s been too long. We need to look beyond fossil fuels, health & safety and explore the heavens again. Not to prove anything to other nations, but because, in the words of Frank Borman (Apollo 8 Commander), “Exploration is really the essence of the human spirit. “.