NASA has reported that the Lunar Reconnaissance Orbiter (LRO) has sent back its first images of Apollo lunar landing sites. They say they will be releasing the images at 12 noon EDT (5pm London Time), today, Friday 17th July. Here is a link to the press release.

Update: The photos have been released at http://www.nasa.gov/mission_pages/LRO/multimedia/lroimages/apollosites.html – Not the clearest, but once the satellite gets to it’s final orbit, we should expect images of the resolution I wrote about below.

The actual photos will probably be released at http://wms.lroc.asu.edu/lroc_browse.

Now, for the bad news… Although the orbiter has a high resolution camera, reportedly able to do one pixel per sqare foot (0.3m resolution), this is at perigee (the closest point of orbit) and at nadir (directly overhead). So far, the best images released are half of that (one quarter of the resolution) at one pixel per 0.56m.

I decided to work out what to expect to see.

The lunar lander module has a maximum diameter of 9.07m. At 56cm per pixel, this makes the lander 16 pixels in diameter… or like this:

Now, let’s overlay it on the moon, with a shadow: 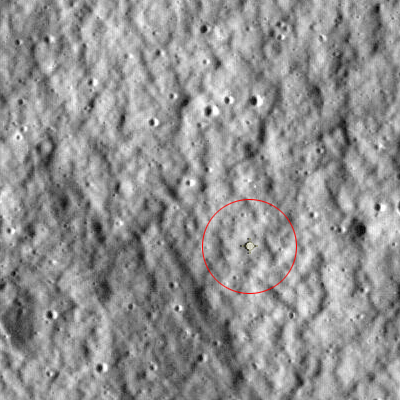 I hope you weren’t expecting more than this…

At some of the Apollo sites, there will be tracks from the lunar rover. The rover is 72 inches wide, which is 1.82 metres, or 2.8 pixels, but the actual wheel tracks will likely be under half a pixel wide so possibly detectable by their shadows.

The foot prints will come in at around 0.5 x 0.25 pixels, hardly detectable.

We should be able to see the actual rovers at 3×4 pixels, and the PLSS (Life support back packs), provided they are lying flat at around 1×2 pixels, but bright white.

Although these images will be of great interest to us Apollo fans, the people who believe it was hoaxed won’t change their minds.